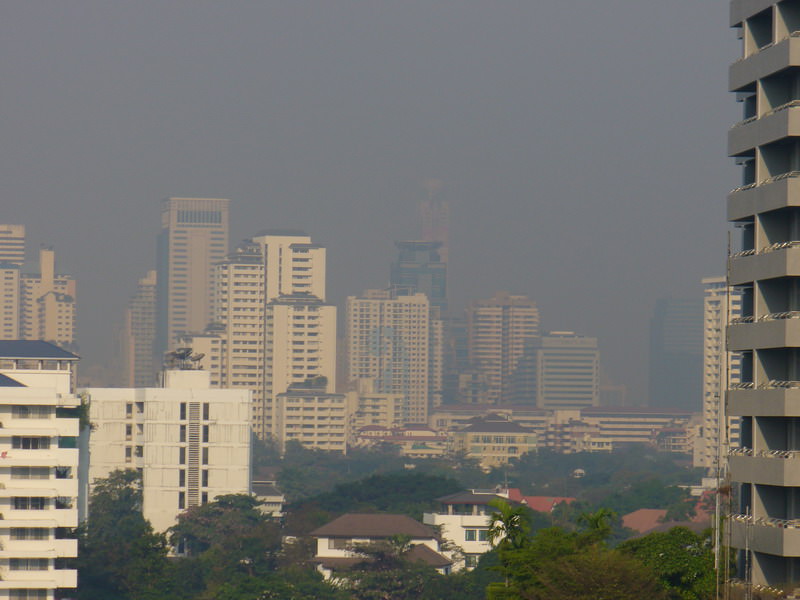 What is this in the air?

People have euphemisms for smog; sometimes it's fog, sometimes it's haze. It's hard to know sometimes whether the air is full of something natural, like water vapor, or something man-made, like CFCs. But in cities like this the air is often being marred by air pollution.

Air pollution started to be a problem when early people burned wood for heat and cooking fires in enclosed spaces such as caves and small tents or houses. But the problems became more widespread as humans began burning fossil fuels, such as coal, on a large scale during the Industrial Revolution (Figure below). 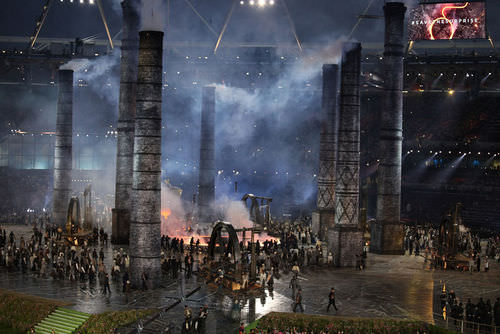 The 2012 Olympic Games in London opening ceremony contained a reenactment of the Industrial Revolution - complete with pollution streaming from smokestacks.

Photochemical smog, a different type of air pollution, first became a problem in Southern California after World War II. The abundance of cars and sunshine provided the perfect setting for a chemical reaction between some of the molecules in auto exhaust or oil refinery emissions and sunlight (Figure below). Photochemical smog consists of more than 100 compounds, most importantly ozone. 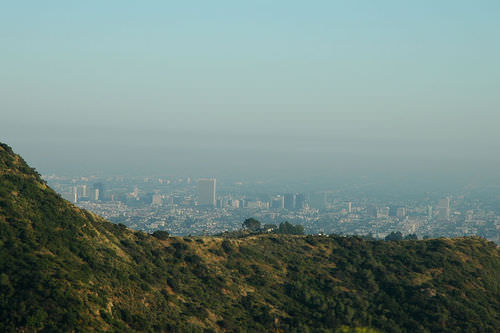 Smog over Los Angeles as viewed from the Hollywood Hills.

Terrible air pollution events in Pennsylvania and London, in which many people died, plus the recognition of the hazards of photochemical smog, led to the passage of the Clean Air Act in 1970 in the United States. The act now regulates 189 pollutants. The six most important pollutants regulated by the Act are ozone, particulate matter, sulfur dioxide, nitrogen dioxide, carbon monoxide, and the heavy metal lead. Other important regulated pollutants include benzene, perchloroethylene, methylene chloride, dioxin, asbestos, toluene, and metals such as cadmium, mercury, chromium, and lead compounds.

What is the result of the Clean Air Act? In short, the air in the United States is somewhat cleaner. Visibility is better and people are less incapacitated by industrial smog. However, despite the Act, industry, power plants, and vehicles put 160 million tons of pollutants into the air each year. Some of this smog is invisible and some contributes to the orange or blue haze that affects many cities.

Air quality in a region is not affected just by the amount of pollutants released into the atmosphere in that location but by other geographical and atmospheric factors. Winds can move pollutants into or out of a region and a mountain range can trap pollutants on its leeward side. Inversions commonly trap pollutants within a cool air mass. If the inversion lasts long enough, pollution can reach dangerous levels.

Pollutants remain over a region until they are transported out of the area by wind, diluted by air blown in from another region, transformed into other compounds, or carried to the ground when mixed with rain or snow.

Table below lists the smoggiest cities in 2018. Fairbanks, Alaska is a surprise at #1. That ranking is due to particulates from people burning wood for warmth in winter. Fairbanks has very little ozone pollution because it has very few cars, and it is not very warm.

Seven of the 10 of the smoggiest cities are in California. Why do you think California cities are among those with the worst air pollution? The state has the right conditions for collecting pollutants including mountain ranges that trap smoggy air, arid and sometimes windless conditions, agriculture, industry, and lots and lots of cars.