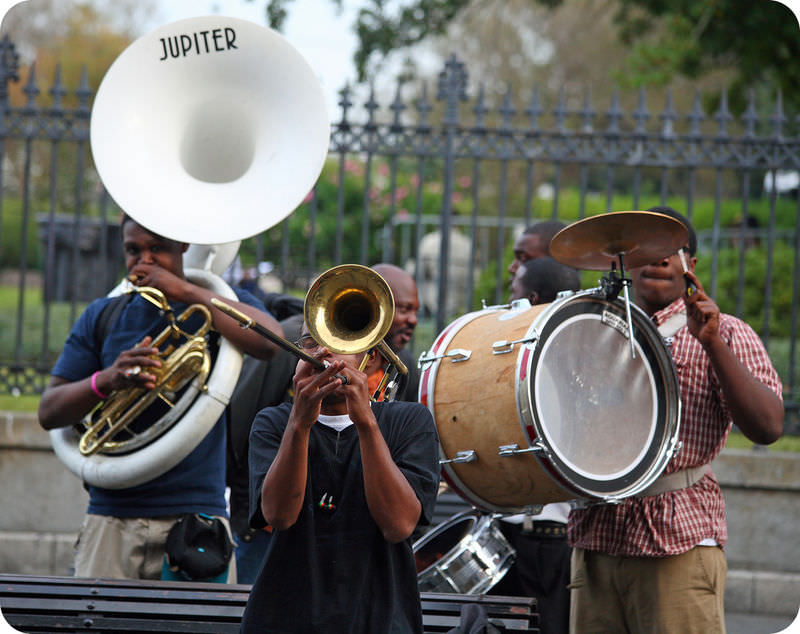 Ever been to The Big Easy?

New Orleans, Louisiana, is a city unlike any other. The city is known for its Cajun food, jazz music, and full out celebration of Mardi Gras. Residents love the city with a great intensity. Yet, many people who evacuated before Hurricane Katrina have not returned. The population is nearly 30% lower than it was in August 2005. Many sections of the city have still not recovered.

Tornadoes may also come from hurricanes. A hurricane (Figure below) is an enormous storm with high winds and heavy rains. Hurricanes may be hundreds of kilometers wide. They may travel for thousands of kilometers. The storm's wind speeds may be greater than 251 kilometers (156 miles) per hour. Hurricanes develop from tropical cyclones. Hurricanes are called typhoons in the Pacific. 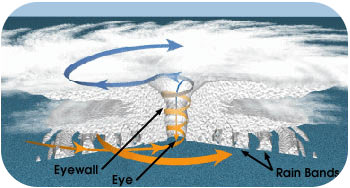 A cross-sectional view of a hurricane.

Hurricanes are cyclones. Since they form in the tropics, they are called tropical cyclones. These storms form over very warm ocean water in summer and autumn. The temperature of the sea surface must be 28oC (82oF) or higher. The air above the water warms and rises. This forms a low pressure cell. The air begins to rotate around the low pressure cell. Water vapor condenses. If conditions are right, the storm will build into a hurricane in two to three days.

Hurricanes are huge and produce high winds. Rainfall can be as high as 2.5 cm (1") per hour. The total rainfall can be 20 billion metric tons daily. The enormous amounts of energy released could equal the total annual electrical power consumption of the United States. That's from just one storm. Hurricanes can also generate tornadoes.

Hurricanes move with the prevailing winds. In the Northern Hemisphere, they originate in the trade winds and are blown to the west. When they reach the westerlies, they switch direction. So they travel toward the north or northeast. You can look at a map of hurricane tracks to see this happen (Figure below). Hurricanes may cover 800 km (500 miles) in one day. 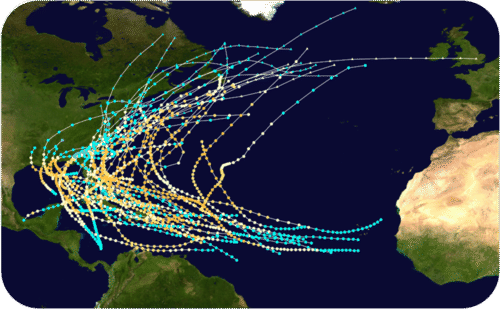 Track map of all hurricanes that have achieved Category 3 intensity in the Atlantic basin, without reaching higher intensities. The points show the location of the storm at 6-hour intervals. The colour represents the storm's maximum sustained wind speeds as classified in the Saffir-Simpson Hurricane Scale, and the shape of the data points represent the nature of the storm (see source link).

The Eye of a Hurricane

The eye of this hurricane is easy to see from space.

Since hot water gives a hurricane its energy, the storm will grow stronger as long as it stays over the warm ocean. If it goes ashore or moves over cooler water, it is cut off from the hot water energy. This causes the storm to lose strength and slowly fade away.

Hurricanes typically last for five to ten days. The winds push them until they are over cooler water or land. When a hurricane disintegrates, it is replaced with intense rains and tornadoes.

Like tornadoes, hurricanes are classified on the basis of wind speed and damage (Table below).

So much rain falling so fast causes some of the damage from a hurricane. But a lot of the damage is caused by storm surge. Storm surge is very high water located in the low pressure eye of the hurricane. The very low pressure of the eye allows the water level to rise above normal sea level. Storm surge can cause flooding when it reaches land (Figure below). High winds do a great deal of damage in hurricanes. High winds can also create very big waves. If the large waves are atop a storm surge, the high water can flood the shore. If the storm happens to occur at high tide, the water will rise even higher.

Storm surge can cause serious flooding.

There are about 100 hurricanes around the world each year. There are many smaller tropical storms and tropical depressions. As people develop coastal regions, property damage from storms continues to rise. However, scientists are becoming better at predicting storms. Fatalities are decreasing. The one major exception was Hurricane Katrina.

Hurricane Katrina was both the most destructive hurricane and the most deadly. When the levees that protect the city broke, much of the city was flooded (Figure below). The hurricane was the costliest natural disaster in U.S. history. Nearly 2,000 people died, and damage was estimated at over $80 billion.

Flooding in New Orleans after Hurricane Katrina caused the levees to break. Water poured into the city.