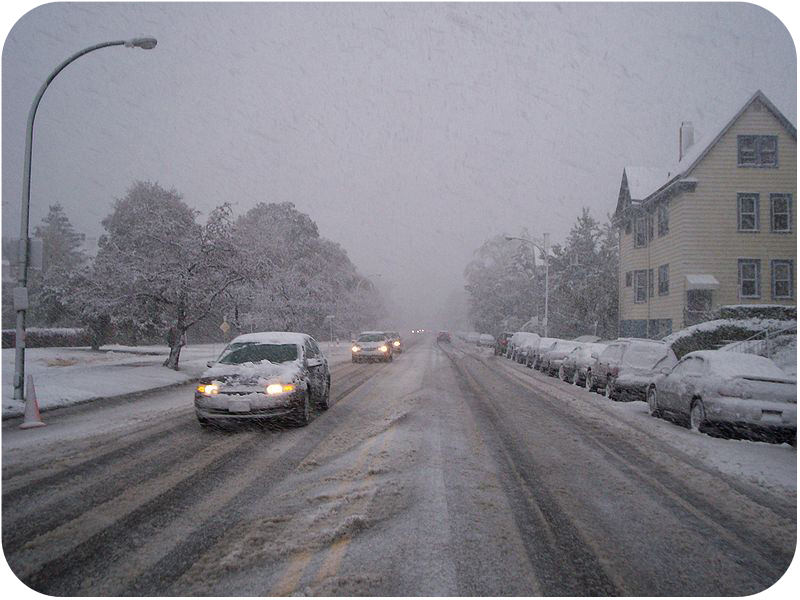 Where are the snowiest cities in the United States?

Eight of the top ten cities with the highest average snowfall are in upstate New York. This region gets so much snow because it is on the leeward side of the Great Lakes. The area receives lake-effect snow. If you plan to visit in winter, strap on your snow shoes!

Like hurricanes, winter storms develop from cyclones. But in the case of winter storms, the cyclones form at higher latitudes. In North America, cyclones often form when the jet stream dips south in the winter. This lets dry polar air pour south. At the same time, warm moist air from the Gulf of Mexico flows north. When the two air masses meet, the differences in temperature and pressure create strong winds and heavy precipitation. Blizzards and lake-effect snow storms are two types of winter storms that occur in the U.S.

A blizzard (Figure below) is a snow storm that has high winds. To be called a blizzard, a storm must have winds greater than 56 kilometers (35 miles) per hour and visibility of ¼ mile or less because of wind-blown snow.

Blizzards are dangerous storms. The wind may blow the snow into deep drifts. Along with the poor visibility, the snow drifts make driving risky. The wind also makes cold temperatures more dangerous. The greater the wind speed, the higher the windchill. Windchill is what the temperature feels like when the wind is taken into account. It depends on air temperature and wind speed (Figure below). Higher windchill will cause a person to suffer frostbite and other harmful effects of cold sooner than if the wind isn't blowing. 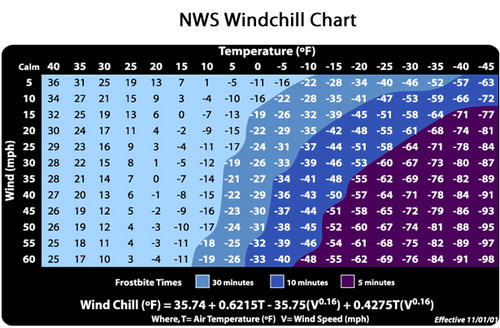 Windchill temperatures may be very low in blizzards because of the high wind speeds. How long does it take for frostbite to occur when the air temperature is 0° F and the wind speed is 55 miles per hour?

Some places receive very heavy snowfall just about every winter. If they are near a lake, they may be getting lake-effect snow. The image below shows how lake-effect snow occurs (Figure below). Winter winds pick up moisture as they pass over the relatively warm waters of a large lake. When the winds reach the cold land on the other side, the air cools. Since there was so much moisture in the air, it can drop a lot of snow. More than 254 centimeters (100 inches) of snow may fall in a single lake-effect storm! 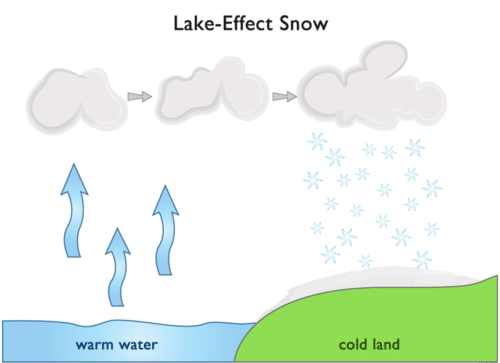