Where in Hawaii do you want to go?

Almost anything can happen with the weather. Climate, however, is more predictable. Climate is the long-term average of weather in a particular spot. Good climate is why we choose to vacation in Hawaii in February (usually on the leeward side). Of course, the weather is not guaranteed to be good! A location’s climate considers the same characteristics as its weather. These are its air temperature, humidity, wind speed and direction, and the type, quantity, and frequency of precipitation. For climate, these things are averaged over time.

During the mid- to late-twentieth century, California received an enormous influx of new residents. Many of these people came from the northeastern United States. They were sick of the cold, snow, and rain. Southern California, especially near the coast, has a nearly perfect climate. The average lows and highs in San Diego year round are in the 50s, 60s, and 70s (Figure below). 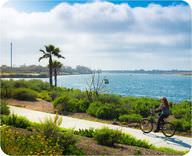 A bike path along Mission Bay in San Diego, California.

The climate for a particular place is steady. Changes occur only very slowly. Climate is determined by many factors, including the angle of the Sun, the likelihood of cloud cover, and the air pressure. All of these factors are related to the amount of solar energy that hits that location over time.

The climate of a region depends on its position relative to many things. These factors are described in the next sections.