Do you want to be a Snowbird?

A Snowbird is usually a person who is retired. Like a migrating bird, they go where the weather is good. A snowbird may spend summers "at home" in Michigan or New York. But they travel to Arizona or Florida to spend their winters in the Sun and warmth. What would a reverse snowbird be? A person who spent summers in the 100+ degree heat and winters in the sub-0 cold. Brrrr....

Latitude is the distance north or south of the Equator. It’s measured in degrees, from 0° to 90°. Several climate factors vary with latitude.

Temperature changes with latitude (Figure below). 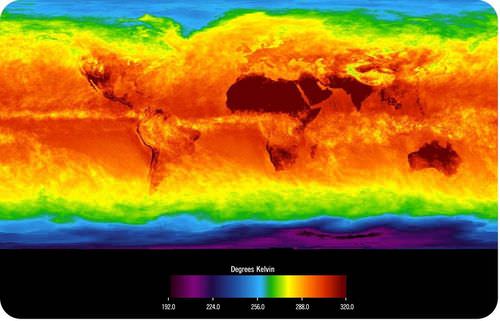 Temperature varies with latitude. If you look closely you can see that other factors influence temperature. Mountain ranges, for example, are cooler than they should be for their latitude.

How Much Does Latitude Change Temperature? 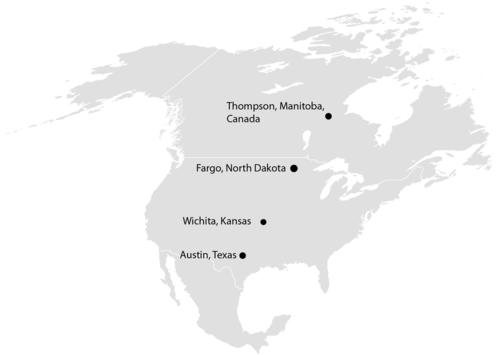 Map of North America showing the locations of four cities that lie along the same longitude.

Austin, Texas; Wichita, Kansas; Fargo, North Dakota; and Thompson, Manitoba in Canada all roughly lie on the 97° west longitude line (Figure above and Figure above). But they run the length of the North America from 30°N in Austin, to 38°N in Wichita, to 47°N in Fargo, and to 56°N in Thompson. Other factors affect their climate, but all four cities are inland.

The table above shows the variation in high and low temperatures that are due primarily to latitude (Table above). Which latitude would you prefer?