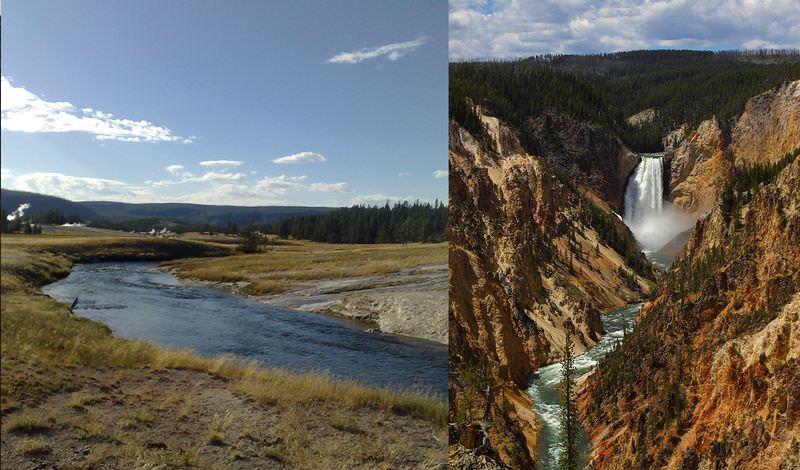 What's different about these landscapes?

Both of these rivers run through Yellowstone National Park. The Firehole River is a tributary of the Madison. In this photo, it's flowing over flat ground. The Yellowstone River on the right is cascading over Yellowstone Falls. Which river is doing more erosion? In what direction is the stream eroding?

Water that flows over Earth’s surface includes runoff, streams, and rivers. All these types of flowing water can cause erosion and deposition.

When a lot of rain falls in a short period of time, much of the water is unable to soak into the ground. Instead, it runs over the land. Gravity causes the water to flow from higher to lower ground. As the runoff flows, it may pick up loose bits of soil and sand.

Runoff causes more erosion if the land is bare. Plants help hold the soil in place. The runoff water pictured below (Figure below) is brown because it eroded soil from a bare, sloping field. Can you find evidence of erosion by runoff where you live? What should you look for? 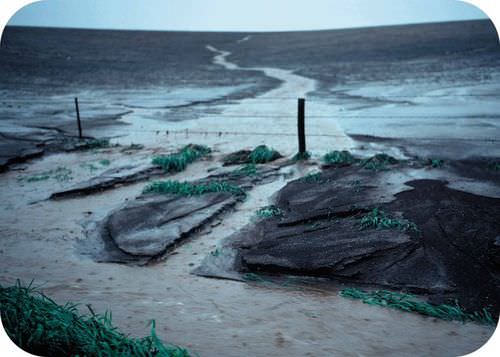 Runoff has eroded small channels through this bare field.

Much of the material eroded by runoff is carried into bodies of water, such as streams, rivers, ponds, lakes, or oceans. Runoff is an important cause of erosion. That’s because it occurs over so much of Earth’s surface.

Streams erode sediment from their banks. They pick up and transport sediments. 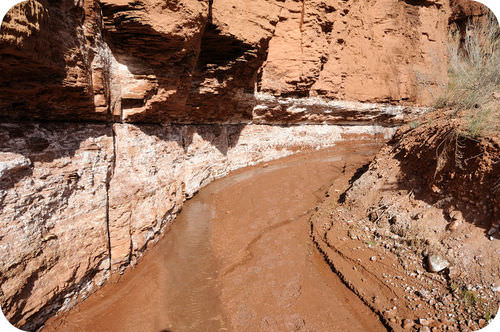 A stream in the desert rushes past its banks. The power of the water erodes the cliff face.

As a stream erodes its banks, it creates a V-shaped valley (Figure above). This contrasts with the U-shaped valleys created by glaciers.

Erosion by a stream depends on the velocity of the water. Fast water erodes more material than slow water. Eventually, the water deposits the materials. As water slows, larger particles are deposited first. As the water slows even more, smaller particles are deposited. The graph pictured below (Figure below) shows how water velocity and particle size influence erosion and deposition. 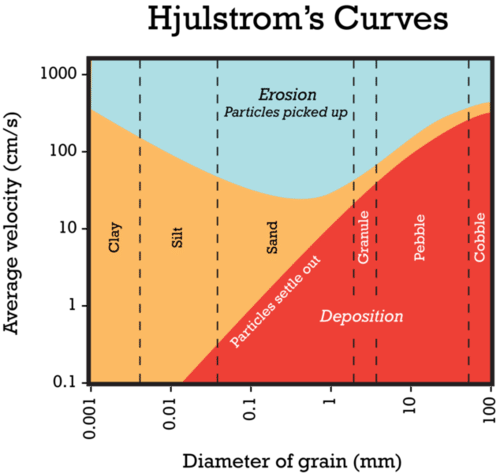 Flowing water erodes or deposits particles depending on how fast the water is moving. It also depends on how big the particles are.

Erosion in the Mountains

Streams often start in mountains, where the land is very steep (Figure below). A mountain stream flows very quickly because of the steep slope. This causes a lot of erosion and very little deposition. The rapidly falling water digs down into the stream bed and makes it deeper. It carves a narrow, V-shaped channel.

This mountain stream is in Whitney Portal in the Sierra Nevada of California. The slope is so steep that water cascades down in a waterfall.

Mountain streams may erode waterfalls. A waterfall forms where a stream flows from an area of harder to softer rock (Figure below). The water erodes the softer rock faster than the harder rock. This causes the stream bed to drop down, like a step. This creates a waterfall. As erosion continues, the waterfall gradually moves upstream. Streams eventually run onto flatter ground. Rivers flowing over gentle slopes erode the sides of their channels more than the bottom. Large curves, called meanders, form because of erosion and deposition by the moving water. The curves are called meanders because they slowly “wander,” or meander, over the land. Below, you can see how this happens (Figure below). 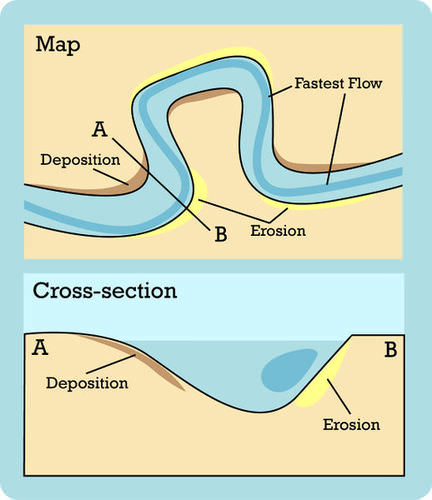 Meanders form because water erodes the outside of curves and deposits eroded material on the inside. Over time, the curves shift position.

As meanders erode from side to side, they create a floodplain. This is a broad, flat area on both sides of a river. Eventually, a meander may become cut off from the rest of the river. This forms an oxbow lake (Figure below). 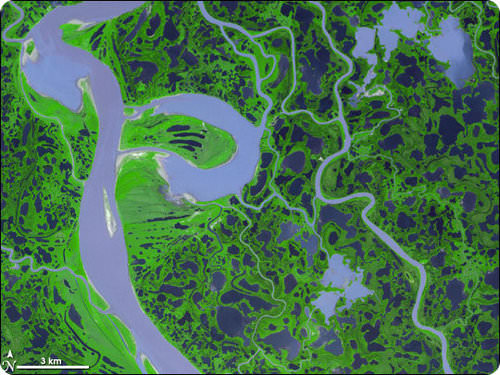 An oxbow lake forms in the Mackenzie River Delta, Canada.

Ever wondered how many licks it takes to reach the center of a lollipop? Mathematicians at NYU’s applied mathematics lab have designed experiments to determine this. Find out in this video by Science Friday.