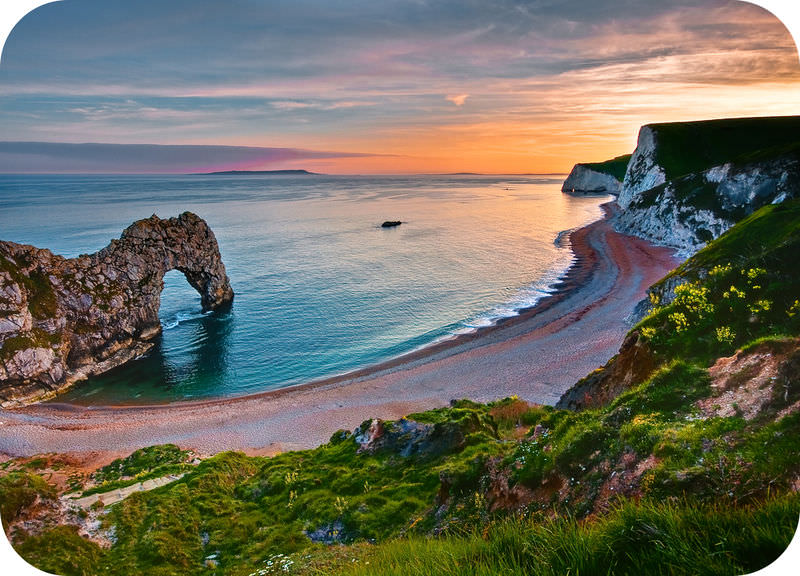 Is this erosion or deposition?

Wave energy does the work of erosion at the shore. Waves erode sediments from cliffs and shorelines. The sediment in ocean water acts like sandpaper. Over time, they erode the shore. The bigger the waves are and the more sediment they carry, the more erosion they cause (Figure below).

Waves erode sediment from sea cliffs. The sediment is then deposited on beaches. These sandy cliffs are in Greece.

Wave refraction either concentrates wave energy or disperses it. In quiet water areas, such as bays, wave energy is dispersed. This allows sand to be deposited. Land that sticks out into the water is eroded by the strong wave energy. The wave energy concentrates its power on the wave-cut cliff.

Erosion by waves can create unique landforms (Figure below).

A wave-cut platform is exposed in Pembrokeshire, South Wales.

A sea arch creates a natural bridge in California.

Rivers carry sediments from the land to the sea. Sometimes the sediments are deposited in a delta. But if the waves are powerful, the water will transport the sediments along the coastline. Sediments eroded from cliffs near the shoreline may also be transported.

Most waves strike the shore at an angle.This creates longshore currents, which move roughly parallel to the shoreline.