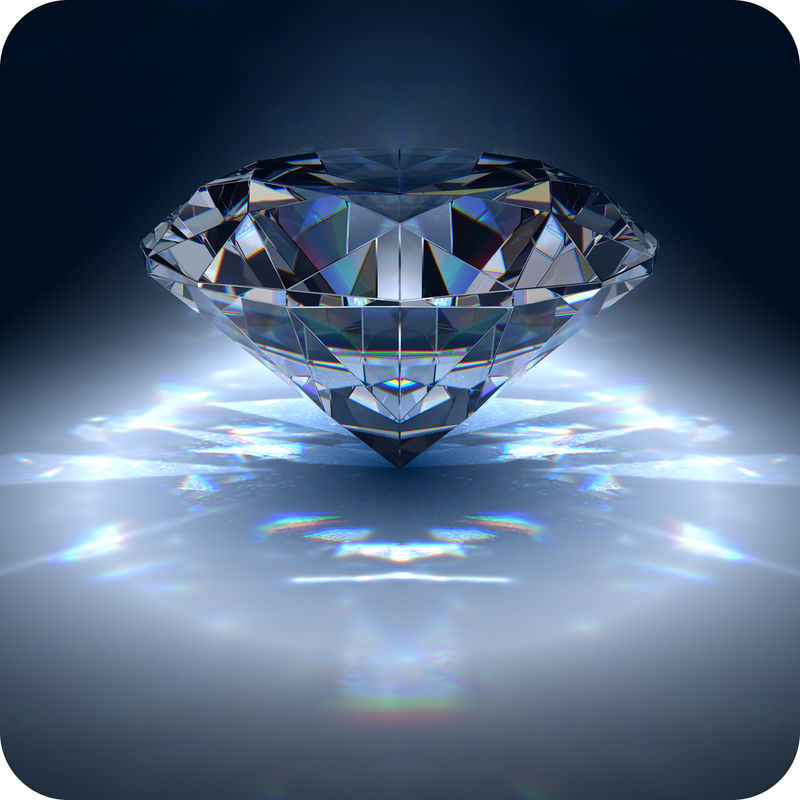 What is a diamond?

Carbon takes all sorts of forms as an element and as a compound. A diamond is just carbon, pure carbon. A diamond is good for cutting things, but it's not good for breathing or building proteins out of, yet other forms of carbon are. Carbon is essential for life on Earth and, as carbon dioxide, it is an important atmospheric gas.

Carbon is a very important element to living things. As the second most common element in the human body, we know that human life without carbon would not be possible. Protein, carbohydrates, and fats are all part of the body and all contain carbon. When your body breaks down food to produce energy, you break down protein, carbohydrates, and fat, and you breathe out carbon dioxide.

Carbon occurs in many forms on Earth. The element moves through organisms and then returns to the environment. When all this happens in balance, the ecosystem remains in balance too.

The short term cycling of carbon begins with carbon dioxide (CO2) in the atmosphere.

Plants and animals engage in the reverse of photosynthesis, which is respiration. In respiration, animals use oxygen to convert the organic carbon in sugar into food energy they can use. Plants also go through respiration and consume some of the sugars they produce.

The chemical reaction for respiration is:

Remember that plants do not create energy. They change the energy from sunlight into chemical energy that plants and animals can use as food (Figure below). 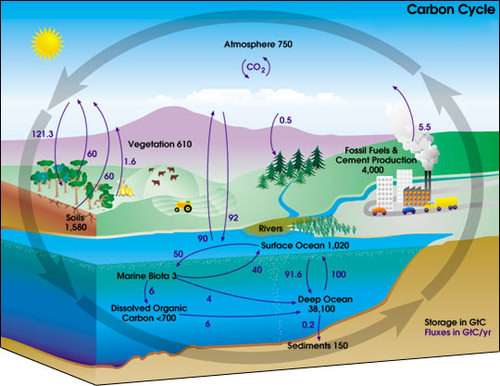 The carbon cycle shows where a carbon atom might be found. The black numbers indicate how much carbon is stored in various reservoirs, in billions of tons ("GtC" stands for gigatons of carbon). The purple numbers indicate how much carbon moves between reservoirs each year. The sediments, as defined in this diagram, do not include the ~70 million GtC of carbonate rock and kerogen.

A reservoir can change from a sink to a source and vice versa. A forest is a sink, but when the forest burns it becomes a source.

The amount of time that carbon stays, on average, in a reservoir is the residence time of carbon in that reservoir.

By measuring the composition of air bubbles trapped in glacial ice, scientists can learn the amount of atmospheric CO2 at times in the past. Of particular interest is the time just before the Industrial Revolution, when society began to use fossil fuels. That value is thought to be the natural content of CO2 for this time period; that number was 280 parts per million (ppm).

By 1958, when scientists began to directly measure CO2 content from the atmosphere at Mauna Loa volcano in the Pacific Ocean, the amount was 316 ppm (Figure below). In 2018, the atmospheric CO2 content crossed over to 410 ppm. The amount of CO2 in the atmosphere has been measured at Mauna Loa Observatory since 1958. The blue line shows yearly averaged CO2. The red line shows seasonal variations in CO2.

This is an increase in atmospheric CO2 of 40% since the before the Industrial Revolution. About 65% of that increase has occurred since the first CO2 measurements were made on Mauna Loa Volcano, Hawaii, in 1958.

Humans have changed the natural balance of the carbon cycle because we use coal, oil, and natural gas to supply our energy demands. Fossil fuels are a sink for CO2 when they form, but they are a source for CO2 when they are burned.

The equation for combustion of propane, a simple hydrocarbon, looks like this:

The equation shows that when propane burns, it uses oxygen and produces carbon dioxide and water. So when a car burns a tank of gas, the amount of CO2 in the atmosphere increases just a little. Added over millions of tanks of gas and coal burned for electricity in power plants and all of the other sources of CO2, the result is the increase in atmospheric CO2 seen in the Figure above.

The second largest source of atmospheric CO2 is deforestation (Figure below). Trees naturally absorb CO2 while they are alive. Trees that are cut down lose their ability to absorb CO2. If the tree is burned or decomposes, it becomes a source of CO2. A forest can go from being a carbon sink to being a carbon source. 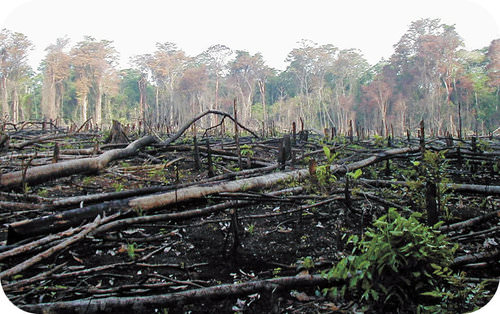 This forest in Mexico has been cut down and burned to clear forested land for agriculture.

Why the Carbon Cycle is Important

Why is such a small amount of carbon dioxide in the atmosphere even important? Carbon dioxide is a greenhouse gas. Greenhouse gases trap thermal energy that would otherwise radiate out into space, which warms Earth. These gases were discussed in the chapter Atmospheric Processes.

Tags recommended by the template: article:topic